Teacher Lin has a dream, in which more and more needy children find their home sweet home

It’s early evening in a village amidst the rolling hills of Nantou County, Taiwan. There’s no one in the gardens of the row of three-storey terraced houses facing a betel-nut plantation. It’s a time when most families are in their living rooms.
But through the front door of one house, the interior is more like a kindergarten than a family living room. Near the door are six low tables. The room is divided by a bookshelf crammed with children’s books. There’s a television, but, as usual, it’s turned off.
“Come on, eat your dinner!” says a bespectacled, 34-year old woman as she’s grabbed from behind by a laughing five-year-old. The girl goes back to her meal, joining two boys and two girls tucking into beancurd, vegetables and rice.
The six are almost a family, brought together by unhappy circumstances and by the woman’s determination to improve the children’s lives. She is Lin Shing-hung, a local primary school teacher. Two of these children are in her class in the nearby Dongguang. Since coming here 12 years ago, Lin has dedicated her life to local children, especially those from broken homes, helping emotionally bruised kids to find stability and self-confidence. Some of them have lived with her, and the five here today, aged five to 11, are the latest she’s taken under her wing.
The dinner is a casual affair, with the children trotting in and out of the kitchen of a neighbour’s house carrying food. But there’s discipline too. All clear empty plates, the eldest girl washing up while the others wipe the tables and sweep the floor. 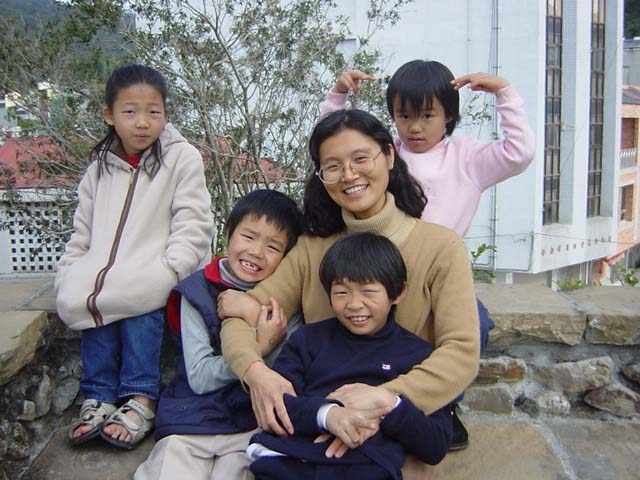 Lin hails from Yunlin County on Taiwan’s west coast and attended middle school there. Aged 18, she entered senior high school in Taipei. After graduating, Lin enrolled in Taipei Teachers’ Training College. She soon joined a college society that arranged activities for primary school kids during vacations. It allowed her to gain hands-on teaching experience and to help children develop skills like handicrafts, painting and – her favourite – music.
Lin discovered first-hand that many children did not lead idyllic lives. She saw children with their faces bruised from beatings by drunken parents. Many regularly played truant because their parents were away. When rural kids grew older, she learned they often headed to cities to find work and the girls sometimes became prostitutes.
Just before graduating, Lin spent a month teaching in Nantou County. She liked the mountains and smaller class sizes, so applied to work in the village of Dongguang. She was accepted and began teaching here in 1991.

Dongguang Elementary School had around a hundred students, aged seven to 12, and ten teaching staff. There were many problem kids. The area had a high divorce rate – over 20 percent – and even parents who stayed together often had little time to look after children, who regularly played truant, misbehaved or paid little attention in class.
She tried talking with the children but they were unresponsive. “Why are you worried about us?” one asked. Lin cried. She wished she could break through, help them somehow.
Some teachers resorted to scolding or smacking. The attitude of one seemed typical. “It’s useless trying,” he said. “Bad kids are bad kids.”
But Lin disagreed. From reading and her observations of people, she believed everyone had good in them. These kids aren’t bad. They need guidance and care. A key to improving their lives, she thought, was engaging them in constructive activities.
After friends visited the school and impressed the children with a musical performance, the principal agreed to Lin’s suggestion that she establish a school band. Many children loved playing instruments; a boy who struggled academically delighted in banging a drum.
She bought the children food and items they needed, like pencils and books. Gradually, she began to win their trust. Once they found that Lin treated them well, they began to listen when she gave advice.
Guo Jia-luo* was a seven-year-old boy who barely spoke, often played truant and whose father was a drinker. When milk started disappearing from a fridge, a teacher suspected he was the culprit, and that he had no money to buy his own milk.
“If you come to school, I’ll buy you breakfast,” she told Guo. He started attending school regularly, and Lin bought him the books he needed. She also gave him breakfast and helped him catch up on basic schooling.
Now in his first year of secondary school, Guo readily communicates with classmates and teachers and is doing well at his studies. The milk thefts have stopped. 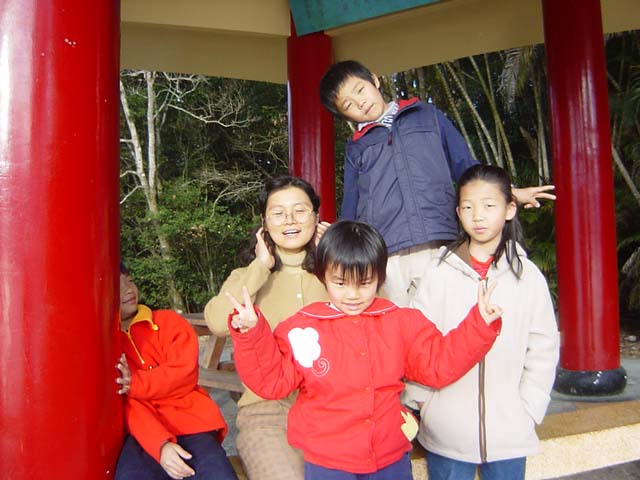 Other kids present tougher challenges. 12-year-old Chen Zhen-meng* was in his final year of primary school when Lin met him. His father was in prison, his mother had remarried and he lived with his grandmother, who found him hard to control. His speech was slurred, and his classmates laughed at him. He often ended up in fights.
“If your classmates laugh at you, ignore them,” Lin advised. “And if you need help with those kids, come to me.”
No one had told Chen to control his emotions before. He began to visit Lin’s home for dinner. One day Lin asked his grandmother, who worked in a local mushroom factory, if Chen could live with her. His grandmother agreed.
It soon turned out that Chen’s speech problem was a result of sloppy pronunciation. With guidance his diction improved. After graduated from his middle school, Chen took a succession of jobs in a restaurant, a gas station and a convenience store. Now, he’s working in a bakery. 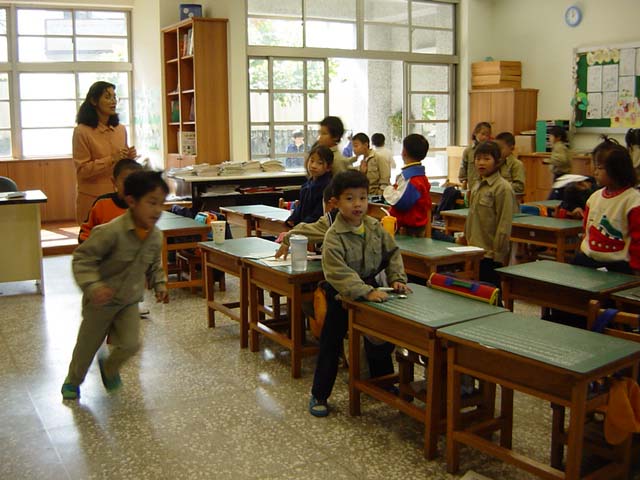 Lin relishes teaching. One can see she’s beaming, her eyes sparkling, as she instructs her class – taking care not to make two of “her” kids favourites. “Who can show seven o’clock?” she asks. A volunteer runs to the blackboard and with chalk draws the hands on a clock face, then writes “7.00”. Lin leads a round of applause. Next there’s addition and subtraction. As Lin relates a tale about mum going to supermarket, kids draw ten apples, then erase five.
Lin instructs a boy and girl to put their hands on the board and draw round them.
“Who knows where the thumbs are?” asks Lin. A girl dashes up to point them out.

The children Lin cares for reflect the fact that this is a small place. They are Guo Jia-luo’s two younger sisters; a quiet boy, Hu Shao-nan*, whose father asked Lin to take him in; Zhang Zhen-chang* and Zhang Cai-yi*, who are cousins of a former ward of Lin’s – Ma Bao-ting*.
Ma arrives at the school one afternoon and cheerfully greets the kids.
Four years ago she was withdrawn. Her father had died, and their working mother had little time for and her and her two younger sisters.
Lin took the three under her wing when Ma was ten, feeding and clothing them, and teaching them how to look after themselves.
Ma was the most withdrawn of the sisters, so Lin found another introvert girl to become her friend and took them on shopping outings and to her home.
After six months, Lin’s patience was rewarded as Ma began to suggest things she’d like to do. Lin never mentioned Ma’s father, but one day Ma pointed to a house, saying, “My dad built that.” Lin realised that Ma was accepting her loss.
Ma’s schoolwork, which had been mediocre, improved, and she finished second in an examination. The younger sisters also responded to Lin’s guidance.

Lin’s selflessness has inspired others to join her in her mission. A number of volunteers join her to take care of the kids.
Neighbour Ting Mei-lin came to Dongguang with her son eight years ago. She soon became so friendly with Lin that they connected their houses. Children staying with Lin happily roam between kitchens. While Lin’s ground floor is like a kindergarten, half of Ting’s is like a restaurant, with food preparation work underway every day.
Friends and family give Lin financial support. Even strangers donate food and clothing. The manager of a shoe shop in Puli, a town nearby, once gave her 30 pairs of children’s shoes. 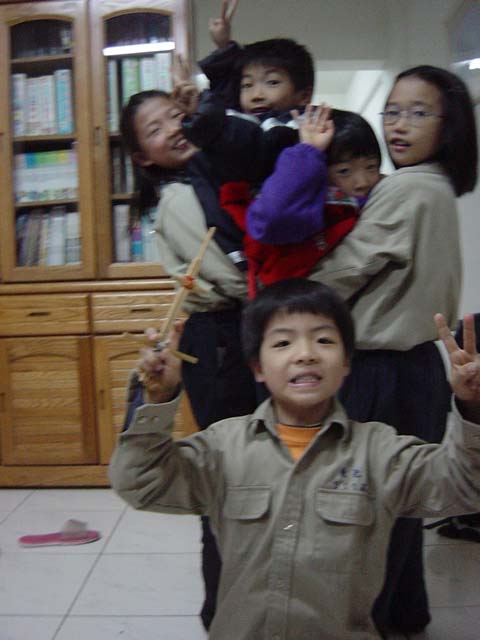 Lin, who has never married, takes her holidays with kids who were under her wing, as well as the five currently staying with her.
In August 2002, Lin with ten kids and nine adults spent two weeks touring Hualien, Taitung and Pingtung.
While Lin loves taking the children out for hikes and picnics, some outings are more serious.
She encourages the children to help in the community. Sometimes she takes them to homes for the aged. One evening in a spring, she took Guo Jia-luo’s sisters to hospital to see their grandmother who had suffered a stroke. They took turns massaging her arms.

Zhang Zhen-chang and Zhang Cai-yi are cousins of Ma Bao-ting. Lin first met Zhang Zhen-chang at Ma’s home. He was staying there, Ma said, because his parents had split up, and his grandmother found the boy too much of a handful. Lin agreed that Zhang could move in with her, then learned that he also had a sister, so she took her in as well.
Such experiences show Lin there are more children in need of guidance than she can possibly care for. But she has a dream – to build a big family, with accommodation, for hard-to-raise kids. If they’re from very poor families, there’ll be no fees, otherwise parents will contribute towards expenses. “I am in the hope that more and more needy children would find their home sweet home,” she says.

Lin Shing-hung resigned from school in July 2003. She has begun building a house with the money and land donation she received. It is expected that Lin and the kids will move to the new house this summer.
She is now living with 9 kids, and their living expenses are paid by some good friends of Lin.

BAD-TASTE BLOOD My home village had about 15 people in it. What we think of as…

November 2013 saw the death of a man described by Craig Venter, among the pioneers of…

The butterfly and the remarkable Professor Hofstadter

This spring, there was excitement in the world of physics as a long-predicted butterfly was proved…

Pan Wenshi: Scientist Who Fights for the Pandas

In a cave near a tributary of the Youshui River, Pan discovers Jiao Jiao, an eight-year-old,…

First Jill Robinson was shocked, then she set out to stop the suffering  The Great Bear…

The best way to get ahead, says this tireless Hong Kong philanthropist, is to help yourself.…

One man’s perseverance offers hope to a critically endangered bird of prey On a warm, sunny…

I’m at a charity ball in Hong Kong, seated among a hundred guests in a bright…

The more lawmakers ignored her, the more determined she became to seek justice On a grey,…

A mysterious illness was striking the medical staff down one by one. How could they fight…

In October 2002, boxes of clothes began arriving in Burkina Faso, a country in West Africa,…

Teacher Lin has a dream, in which more and more needy children find their home sweet…