If it’s autumn as you read this , flocks of bar-tailed godwits may be departing the south coast of Alaska. These brown wading birds appear fairly nondescript – like smaller cousins of curlew – but are embarking on one of the greatest migratory journeys known.

The godwits are will fly non-stop for some 11,700 km (7270 miles), the distance from Hong Kong to Los Angeles, and the longest known flight by any creature. After perhaps eight days, they will arrive at their destination, coastal mudflats in New Zealand. Church bells will ring to welcome flocks touching down in Christchurch, where they are regarded as harbingers of spring.

Bird migration is among the wonders of the natural world. It has evolved in response to the great rewards of being able to exploit food in a place like Arctic tundra, whilst also fleeing winter conditions that make life impossible for a many birds. Yet there are also immense risks, and countless birds die en route.

Migratory birds have a host of remarkable adaptations that enable them to undertake such journeys. To prepare for their autumn marathon, the bar-tailed godwits store energy, until fat comprises up to 55 percent of their body weight. Their livers, kidneys and intestines shrink, becoming almost useless, as the birds’ bodies become focused on flying.

The godwits have innate weather forecasting skills: “All the departures we’ve observed to date were associated with low pressure systems,” noted Bob Gill, a wildlife biologist with the US Geological Survey’s Alaska Science Center, who was in a team studying godwits. “The birds get on the back side of these lows and get 900 to 1,200 kilometres (558 to 744 miles) of pretty strong tailwinds.”

Built-in weather knowledge could also help the godwits avoid being buffeted by Pacific typhoons. No one knows for sure, just as no one fully understands how birds navigate.

Experiments have revealed that birds can use a range of methods to help with navigation. The most obvious of these is following familiar landmarks, such as rivers, coastlines and even highways that feature in their mental maps. At least some migrants have mental star maps, for orientation on clear nights, and indicating arrival at their destinations.

The height and position of the sun can help birds judge the direction in which they’re headed. Yet this is no help in cloudy weather, nor can just observing the sun fix position when there are no landmarks in view – which proved so challenging for humans that it was not until the late 18th century that mariners could determine longitude while at sea. For precisely determining their position and direction, birds need a sense we don’t consciously possess: gauging the earth’s magnetic field.

Experiments have shown that birds can orient using magnetic fields, and a change as small as a thousandth of the earth’s magnetic field can affect the navigation ability of European robins. Yet it is unclear how they sense magnetism. There were notions that iron-rich cells near pigeons’ beaks serve as tiny compasses. But researchers have found only white blood cells that do not produce electrical signals. The true answer could be far more bizarre.

Robins’ magnetic sense requires them to see clearly – in turn leading to notions that it depends on a weird property of matter known as quantum entanglement. Possibly, light excites two electrons on a molecule of a suitable chemical, leading to one electron departing for another molecule of the same chemical. Though the electrons are now separate, their “spins” would be inextricably linked for a short time, during which they would be affected by the earth’s magnetic field. The magnetism could affect the chemical’s properties, resulting in subtle changes across the eye that lead to a bird “seeing” the earth’s magnetic field.

A candidate for the chemical responsible for sensing magnetism is a protein known as cryptochrome. Intriguingly, fruit flies with cryptochrome receptors can navigate using magnetism; those without fly as if oblivious to the magnetic field.

While the ways birds navigate remain mysterious, we have far more knowledge of the routes they take. This is partly thanks to satellite tracking of birds including the bar-tailed godwit given the code E7.

E7 is a female bar-tailed godwit that was captured, tagged and fitted with a satellite transmitter in New Zealand in February 2007. No one was then certain that these godwits really flew the length of the Pacific in one flight, yet in autumn that year scientists monitored as she left Alaska on 29 August, passed near Fiji, and on 7 September landed at an estuary eight miles from where she had been captured. In March, E7 had made two other huge flights: taking her to coastal mudflats in north China, 10,300km (6400 miles) away, and then another 6500km (4500 miles) to Alaska.

While in north China, E7 spent five weeks refuelling in readiness for the breeding season ahead. Tens of thousands of other godwits were likewise refuelling at this and other wetlands around the Yellow Sea – which is among the world’s greatest areas for intertidal mudflats and the wildlife that depends on them. According to WWF China, the Yellow Sea is the most important site for migratory birds in the East Asian-Australasian Flyway, which encompasses the routes of a myriad species. Millions of birds pass through each year. 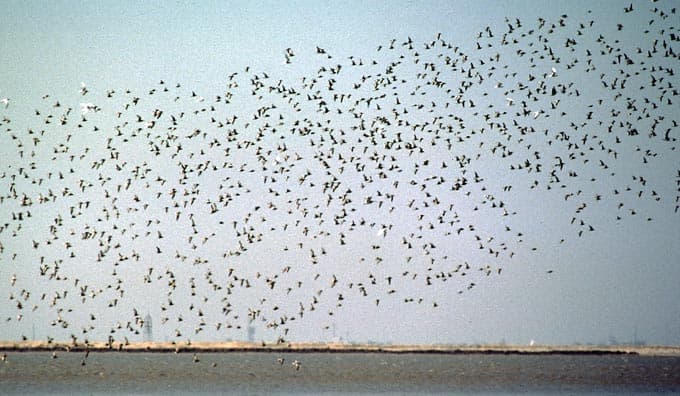 The godwits are among an outstanding variety of shorebirds that rely on the Yellow Sea wetlands as stopovers on their journeys. There are also geese, ducks, cranes, cormorants and other wetland birds. Some species are unique to east Asia, some face extinction; one, spoon-billed sandpiper, probably numbers less than 500 in all.

Yet while the Yellow Sea should be a key region for conservation efforts, wetlands are being casually destroyed. Within the last decade, South Korea reclaimed an estuary eight times larger than Hong Kong Island. There are ongoing massive reclamation projects along the Chinese shore – notably in Tianjin which, ironically, is also building an artificial “eco city”. Water pollution is severe.

Wetlands are also threatened elsewhere along the flyway, including in Hong Kong. As habitats dwindle, populations of the migratory birds depending on them will continue to decline. Year by year, there will be less wonder in the world. Perhaps a season will come when the church bells in Christchurch remain silent, as godwit flocks no longer arrive.

The Bar-tailed Godwit Limosa lapponica undertakes one of the avian world’s most extraordinary migratory journeys.