I have been involved in discussions regarding the possibility “integrated fish farming” may play a role in sustaining and even spreading H5N1 bird flu: including when poultry manure is used as fish feed (see forum here; also links below). So when I stayed by a fish farm just outside Jakarta at the beginning of this month, I took a walk around.

Surprised by what I saw – included chicken carcasses being devoured by catfish. Carcasses, and bags of poultry manure, perhaps from an adjoining chicken farm, which was in a walled compound with a guard post at the gate. Took several photos, several of which are below: warning, not too great if you’re squeamish, or perhaps about to eat.

Walked across this concrete divide, taking care not to fall in – esp w chicken carcass floating close by (bottom right).

Here’s another of the ponds. Walked along edge here after noticing more chicken carcasses ahead, w fish feeding. Note the toilet just over the water’s edge: nothing going to waste here. For myself, I believe H5N1 problems a signal of our human over-population, forcing ourselves to create food in intense ways that aren’t great, or perhaps are downright terrible.

Turned out the fish were feeding v actively, on dead chickens floating by edge of the pond.
Now, suppose chickens had died of H5N1. Surely this way, would get H5N1 into the fish guts (how long might it remain?), as well as onto skin, and into water.

(Soon afterwards, in Jakarta, went to a Thai restaurant where menu included catfish salad. Err, no thanks.)

There were also chicken carcasses on wooden platforms over the water, with a little sacking on top. I wondered about this, till told that maggots could fall from them to water, adding to fish food.

A shed held these bags of poultry manure, evidently as further feed (inc for young fish?).

Just beside the fishponds was this small duck pond.

Lots of snail  fragments by the duck pond. Evidently from pond snails fed to the ducks; the snails from the fishponds apparently – so if any bird flu present in pond, could circulate this way. Domestic ducks have been shown to sometimes harbour the virus without getting sick.

Here are some of the villagers by the fish farm.

While H5N1 is a bird flu, it can infect and kill people in close contact w poultry. (Were chickens scratching around, too, tho looked healthy so no sign of infection.)
Has anyone warned these people about H5N1 I wonder? Any attempts made to change the practices in integrated fish farming – which seems all very well in umpteen FAO documents, but doesn’t look so grand when seen like this.

H5N1 in chicken and duck manure? – forum thread on this website, with plenty more info.

Fish farming and the risk of spread of avian influenza (pdf file) – by ornithologist Chris Feare (oddly, tho Food and Agriculture Organisation vigorously promoted integrated fish farming, FAO not forthcoming with reports re their possible role in sustaining and spreading H5N1 influenza). 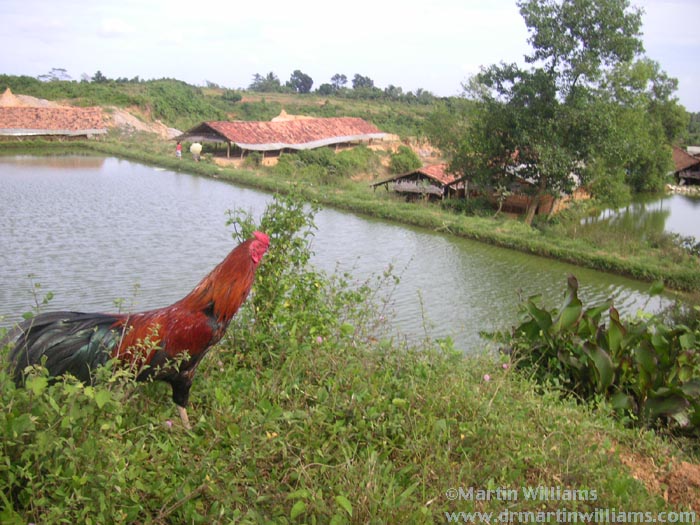