Elsewhere on this site, such as in the forum H5N1 Poultry Flu and migratory birds, there is lots of info on wild birds being unfairly scapegoated for spreading highly pathogenic bird flu aka avian influenza, or HPAI in short. Can be far easier targets than, say, the poultry trade, which is massive, with considerable vested interests. Basically: HPAIs severely impact and even kill wild birds, hence aren’t spread by wild birds: Dead Ducks Don’t Fly.

This spring, however, there are several outbreaks causing major bird deaths in seabird colonies on both sides of the Atlantic: including at remote colonies, where even to me it is absurdly far-fetched to consider that the virus arrived via trade. So, what might be happening?

It seems to me there is now a highly pathogenic variant of bird flu – or set of related variants – that are less lethal to wild birds, so can be carried over some distances to reach seabird colonies, for instance.

Does this mean the poultry trade no longer plays a major role in spreading HPAI? Perhaps not; and as previously, it does also seem that wild birds can be readily blamed, even with funding support; while investigations of the poultry trade, warts and all including smuggling, seem lacking by comparison.

From Guangdong to the world with virulence

Especially given concerns bird flu might transform into a dangerous human flu (not infecting a few people then not transmitting to other humans, as is the case so far), there have been many studies of avian influenza, including since I was especially active in trying to review information, contact interested people, and maintain the forum etc.

“Doing my own research” using Google, I’ve found a paper that seems very useful for giving some background information, history etc: Highly pathogenic avian influenza is an emerging disease threat to wild birds in North America. It’s a long paper, well worth a look; some quotes from it:

Prior to the emergence of the A/goose/Guangdong/1/1996 (Gs/GD) H5N1 influenza A virus, the long-held and well-supported paradigm was that highly pathogenic avian influenza (HPAI) outbreaks were restricted to poultry, the result of cross-species transmission of precursor viruses from wild aquatic birds that subsequently gained pathogenicity in domestic birds…. Since 2002, this paradigm has been challenged with many detections of viral descendants of the Gs/GD lineage among wild birds, most of which have been associated with sporadic mortality events. Since the emergence and evolution of the genetically distinct clade 2.3.4.4 Gs/GD lineage HPAI viruses in approximately 2010, there have been further increases in the occurrence of HPAI in wild birds and geographic spread through migratory bird movement.

Given the apparent maintenance of Gs/GD lineage HPAI viruses in a global avian reservoir; bidirectional virus exchange between wild and domestic birds facilitating the continued adaptation of Gs/GD HPAI viruses in wild bird hosts; the current frequency of HPAI outbreaks in wild birds globally, and particularly in Eurasia where Gs/GD HPAI viruses may now be enzootic; and ongoing dispersal of AI viruses from East Asia to North America via migratory birds, HPAI now represents an emerging disease threat to North American wildlife….

Concomitant with the southward migration of migratory waterfowl in late November 2014, HPAI viruses were detected in wild birds inhabiting the United States and Canada for the first time in recorded history…. The best available evidence suggests that Gs/GD HPAI viruses were introduced from East Asia to North America via Alaska by wild birds with extensive reassortment, or the genetic shuffling of viral genes, between these HPAI viruses and other AI viruses maintained in North American wild birds following viral introduction

information on viral threats occurring in wildlife at areas most spatially proximate to North America remain cryptic. Information on the timing, frequency, and routes of intercontinental migratory movements across the North Atlantic and North Pacific Basins is still incomplete for numerous wild bird hosts of AI viruses that may be capable of dispersing viruses from Europe or Asia into North America.

So, while the HPAIs of particular interest in wild birds nowadays evidently stem from the Guangdong goose lineage (as the paper puts it, “the genetically distinct clade 2.3.4.4 Gs/GD”, there is little certainty regarding for the mechanisms for spread from Asia to the rest of the world including North America. Wild bird migrations may fit – and can seem highly plausible, but no certain case of a wild bird carrying HPAI to another area and causing an outbreak has been identified.

There’s no smoking gun; though of course finding such a case would be very very difficult; and experiments would be unethical and dangerous.

Importantly, it seems the Guangdong goose variant has evolved, producing further variants, in wild birds. As would be expected for evolution of this flu, it has become less virulent in wild birds: or at least in some of them:

This could mean, then, that apparently healthy ducks – and other wild birds – might be able to sustain and spread this form of HPAI (which still remains highly pathogenic in chickens, which are the species tested for pathogenicity of bird flu). However, as also noted in the paper:

So if you come across anyone professing absolute certainty about wild birds spreading HPAI: well, ask for their evidence, and maybe entertain them with this handy meme:

Another paper looking well worth a look is Ecological divergence of wild birds drives avian influenza spillover and global spread. As this notes:

Studies of IAV have historically focused on Anseriformes, specifically dabbling ducks, overlooking the diversity of hosts in nature, including gull and goose species that have successfully adapted to human habitats. This study sought to address this imbalance by characterizing spillover dynamics and global transmission patterns of IAV over 10 years at greater taxonomic resolution than previously considered.

As ever, no actual instances of transmission from wild birds are reported; instead the study relies on modelling, and concludes:

Domestic birds were responsible for slow but steady range expansion of HPAI H5, while wild birds such as geese, swans, gulls and ducks contibuted to rapid but episodic dispersal via uniquely different pathways.

Worth noting, I think:

Experimental studies indicate that gulls are a permissive host for multiple lineages of HPAI H5, a finding that agrees with consistent detection of this subtype in gulls across Asia and Africa where the virus has become established. Whether gulls play a role in the maintenance of HPAI H5, or they represent a spillover host in which transmission is transient is an important question warranting further investigation.

Instead of looking at movements of wild birds themselves – can birds with HPAI really travel long distances?, the methodology was modelling, as follows:

We reconstructed the global phylogeography of the three subtypes: H13, H16 and HPAI H5 using a discrete trait model based on 11 geoclusters of the globe…. HPAI H5 revealed a geographic distribution centred in the eastern hemisphere with transmission primarily seeded by the Black Sea-Mediterranean (29.45% Markov jumps), East Asia (17.77% Markov jumps) and Central Asia (17.37% Markov jumps). The Black Sea-Mediterranean, Africa and Central Asia were important sources of HPAI H5 for continental Europe, while further transmission to Northern Europe was rarely detected.

On average, the HPAI H5 subtype spread at a rate of 4250 km/year among wild birds… Wild geese and swans were identified as primary source hosts for HPAI H5, responsible for transmission leading to infection of wild ducks, gulls and land birds, as well as domestic geese, based on the results of the Markov jumps analysis.

Anyway, given this conclusion, should have a way to test if the paper is scientifically sound: can it indeed help with predictions, early detection of avian influenza spillovers between wild and domestic systems?

Sadly, there might be no such study on the poultry trade spreading bird flu, and whether insights regarding this are better for predicting trouble with bird flu. If you know of one, please let me know.

So, if Dead Ducks Don’t Fly is no longer a nice n simple rule of thumb, are wild birds now able to undertake long migratory flights even when infected with highly pathogenic bird flu?

As yet, perhaps, there are only inferences and assumptions that this is the case. Among the most egregious examples I’ve seen lately: a New York Times story suggested an infected Greater Black-backed Gull could cross from Europe to Newfoundland in 24 hours – which by my reckoning means a non-stop flight at around 80 miles per hour [if depart west Ireland, fly direct]! Pure guesswork involved here; quite absurd, for a species not known to regularly make this journey.

See also in the forum here on two tracking studies that did detect HPAI in three ducks whose movements were then tracked: all flew more slowly than uninfected ducks, with one slow to continue its migration, one loitering in region near the capture site, and the other dying three days after being caught: Two studies find three wild ducks with highly pathogenic bird flu

As to the kinds of issues that can impact birds infected with HPAI, there’s a paper: Gross pathology of high pathogenicity avian influenza virus H5N1 2021–2022 epizootic in naturally infected birds in the United Kingdom

Cardiac lesions such as epicardial petechiae and hydropericardium were also commonly observed in chickens, pheasants, guinea fowls and ducks…. Overall, pancreatic and splenic necrosis were the most common features presented across various avian species infected with HPAIV.

Another study also found issues within birds infected by highly pathogenic avian influenza; and noted that sick/dead wild birds such as ducks could in turn attract predators such as Great Skua to feed and in turn become infected (this year, worryingly high numbers of Great Skuas have died of bird flu). This paper is Tropism of Highly Pathogenic Avian Influenza H5 Viruses from the 2020/2021 Epizootic in Wild Ducks and Geese. In conclusion:

HPAI H5 viruses from the 2020/2021 epidemic expressed a diverse repertoire of tissue tropism, including respirotropism and neurotropism, as well as a high level of in vitro enterotropism, in infecting wild ducks and geese.

Given such impacts, it’s perhaps hardly surprising that infected migratory ducks might be effectively “hobbled”, even confused, and may well even die. 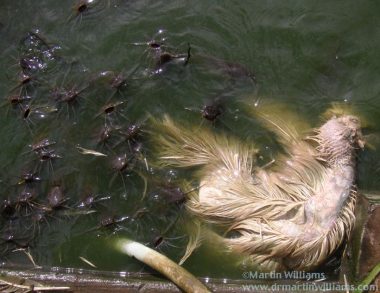 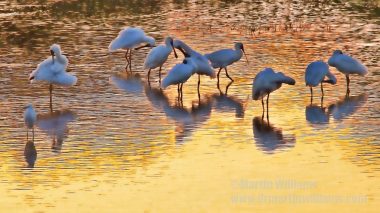 Posted or Last Updated on 24 July 2022 by Martin Williams