This past summer, a team of biologists scoured Siberian tundra in search of nests and eggs of one of the world’s most threatened species, spoon-billed sandpiper – a diminutive shorebird that’s familiar to Hong Kong birdwatchers as it is a scarce annual migrant at Mai Po Marshes.

Spoon-billed sandpiper is the only shorebird with a flattened tip to its bill. In recent years, it has gained another reason for fame, as its world population has plummeted from around 1000 pairs in 2000 to probably less than 100 pairs today. As the Wildfowl and Wetlands Trust notes, the sandpiper is “hurtling towards extinction”.

The tundra-scouring biologists were working on a project to try to save the Spoon-billed Sandpiper, by raising young birds in captivity, so they can begin breeding, and young birds can some day be released into the wild. They took 20 eggs to the WWT’s headquarters in Slimbridge, UK. With 17 hatchlings from these eggs, plus 11 youngsters brought from Russia last year, there are now 28 spoon-billed sandpipers in captivity. Perhaps they will become the nucleus of a breeding group.

While the spoon-billed sandpiper project is ambitious, and even desperate, captive breeding is not new. One of the first examples involved Père David’s deer, which was native to China but became extinct there in 1900. Some had been illegally exported to Europe, and England’s Duke of Bedford gathered the remaining animals to nurture a herd of deer. Their numbers built, and deer have since been sent to China, establishing small, managed populations.

There have been other captive breeding success stories. During the 1950s, Slimbridge played a pivotal role in saving the Hawaiian goose, whose wild population had crashed to a mere 30 birds by 1952. From 1962, geese were re-introduced to the wild, and now there are around 1000 in Hawaii.

Romer’s tree frog was originally known from just four islands, all in Hong Kong. When one of these islands – Chek Lap Kok – was being largely demolished to make way for the new airport, reptile and amphibian expert Michael Lau collected all the Romer’s tree frogs he could find there. He took some to the University of Hong Kong; others went to Melbourne Zoo. The frogs bred, almost 3000 frogs and tadpoles were released in the New Territories and on Hong Kong Island, and while Romers’ tree frogs lost an island, they now inhabit six new locations. 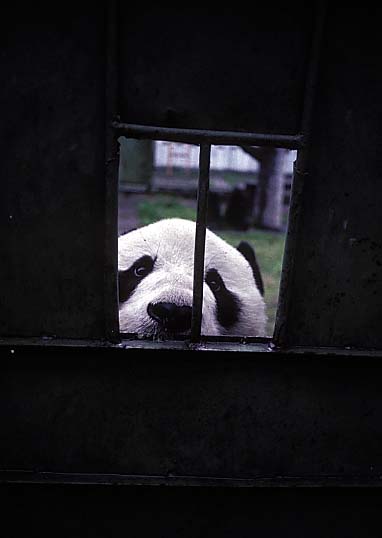 But captive breeding is far from ideal. Efforts to rear giant pandas have proven especially controversial. Though substantial funds and efforts have gone towards breeding pandas in captivity during the past thirty years, the results have been poor. Initially, births in captivity outnumbered deaths. It was only in 2006 that the first captive-bred panda was released to the wild, yet he soon died after a tussle with wild pandas. A second panda, Tao Tao, was released this autumn.

It has taken millions of dollars plus countless manpower hours to produce Tao Tao. Yet the main problem with breeding pandas in captivity is not the feeble success rate, but the fact it can prove a distraction from the main conservation measures needed: keeping bamboo forests as intact as possible, while minimising disturbance from burgeoning tourism.

Species may not even survive till captive breeding programmes begin. The baiji (Chinese river dolphin) was unique to the Yangzi. As it teetered on the brink of extinction during the 1980s, two semi-natural reserves were established, with the aim of nurturing individuals captured from the wild. But surveyors could not find any baiji to capture, and the last wild one on record was photographed in 2002, the same year a male died after 22 solitary years in a dolphinarium. Now, the baiji is surely extinct, 20 million years after first arriving in the Yangzi.

At the bedside of a dying relative?

In the Philippines, I’ve visited a project that includes captive breeding the national bird – the Philippine eagle. I had read an article in which the writer was impressed by the way semen is collected from male eagles – which act as if mating with humans they bond with. Yet the work was far from frivolous, with a dedicated team focused on attempts to raise young eagles, as well as striving to protect the remaining forest tracts where wild eagles survived.

One comment from an eagle biologist was especially striking I thought: his mentor had told him they were like people sitting at the bedside of a dying relative, keeping them company before the inevitable demise.

It seemed a bleak prognosis. I responded that species can sometimes bounce back, given the chance. Extinction is not always inevitable.

If we breed them, can they survive?

Even so, the odds are against endangered species, with or without captive breeding programmes. A key reason is indicated by security features installed around turtle breeding pens at Kadoorie Farm and Botanic Garden. The pens hold Golden Coin Turtles, a small freshwater species that is almost extinct in the wild. As well as having hefty padlocks, the pens are connected to security systems that guard against theft – for each turtle can fetch thousands of dollars in illegal trade.

While conservation projects tend to operate on shoestring budgets, and often rely on volunteers, WWF International has reported that the global trade in illegal wildlife is worth around US$19 billion a year. A host of species are traded, and high profit margins spur the involvement of organised crime gangs. Should the Kadoorie Farm team release any turtles to the wild, a concern will be the possibility of trapping by poachers.

Spoon-billed sandpiper is also threatened by trade, albeit as a relatively inexpensive food item in its south Asian wintering areas. But in the case of the sandpiper, a far more basic question may confront biologists who later wish to release birds reared in Slimbridge. Vast expanses of coastal mudflats are being devastated by developments along the sandpiper’s east Asian migration routes, so will there be sufficient habitat left for the species to survive in the wild? If not, what then?

What would be the meaning of sustaining a species in captivity, when its real home is no more? There are no easy answers, partly as some species suit captivity more than others. But as numbers of threatened species continue rising, spurring further captive breeding schemes, we may find ever more creatures are kept on artificial support – gone or almost gone from the wild, but artificially surviving

Already there are biologists arguing that for species like the giant panda, the best thing might be to switch resources away from captive breeding: switch off the artificial life support, and let them slip away, into oblivion.

Posted or Last Updated on 31 August 2022 by Martin Williams