It’s 6 a.m. and I’m perched atop Mount Kinabalu in Sabah, waiting for the sun to rise. Zipped tightly into my jacket, I guess that the temperature is just above freezing. It’s hard to believe that the balmy rain forest of Borneo is just a few miles away.
“It’s a bit chilly, isn’t it?” I say to one of my fellow climbers. He’s almost too frozen to reply. “My hands are so cold,” he says, fumbling with his camera, “I could easily drop something.” And from here, that might mean never seeing it again, for there is little beneath us but empty space.
During the three hours I climbed since leaving a warm bed in the middle of the night, I wondered whether my goal, 13,432-foot-high Low’s Peak atop Kinabalu, was worth the effort. With the first rays of the sun now breaking over the eastern horizon, I’m about to find out.

An astonishing variety of scenery

The tallest mountain between New Guinea and the Himalayas, Kinabalu reigns over an astonishing variety of scenery. At its foot, I found waterfalls in lush rain forest. A third of the way up, at Kinabalu Park headquarters, I walked in dense stands of smaller trees adapted to the moderate temperatures of that altitude. As I climbed higher, a chilly mist enveloped the thinning forest. Passing the tree line, I found a stark landscape of swarthy shrubs, and above that only crags, precipices and rock walls stretching to the summit. 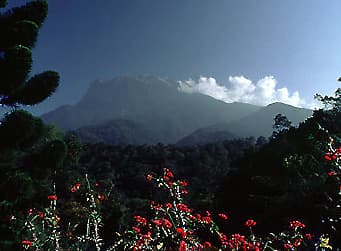 Mount Kinabalu is not as high as Mount Everest, or as dramatic as snow-capped Mount Fuji, or as treacherous as China’s Gongga Shan. But mountaineers and naturalists agree that it is unequaled for the exuberant variety of its wildlife and landscapes. “Mount Kinabalu is impressive, even compared with the world’s greatest mountains,” says Robert New, a mountaineer who has also climbed in the Rockies and Alps. At the summit, “there’s a sense of release and freedom, in contrast to the jungles of the lowlands.”
Formed in the last ten million years, Kinabalu is an infant compared to the 100 million-year-old Himalayas. Magma thrust upward into weaknesses in the earth’s crust, then cooled to form granite that was exposed as the elements eroded the overlying rock. In the last ice age, sheets of shifting ice scoured Kinabalu into broad, smooth expanses. It is believed that a great glacier ran northward, eating its way down into the mountain and leaving the great chasm of Low’s Gully.
The mountain offers challenges to even the most hardened trekkers and climbers — who might make the more difficult ascent to the eastern plateau, or take the easy way to Low’s Peak, which also gives access to abundant pinnacles. The tourist route up Kinabalu’s southern ridge, which I took, typically requires two days for the return trip.
I had set out from near park headquarters, located at 5130 feet, around 8 a.m. Climbing steps cut into the sloping forest floor, I reached a rest house at 10,730 feet before 4 p.m. After an all-too-short sleep, I began the final, and toughest, part of the climb at 2 a.m. Steep flights of wooden steps were followed by smooth granite slopes. On the steeper sections I’d hauled myself up on fixed ropes. The final stretch crossed a jumble of boulders where a misstep could mean a twisted ankle or a fall.
No extensive training was needed, however, which makes Mount Kinabalu one of the world’s most-climbed major peaks. While fewer than 800 people have conquered Mount Everest, last year alone an average of 91 people reached Low’s Peak each day.
What draws so many people? Says park warden Eric Wong, “There is a feeling of satisfaction when you have climbed Kinabalu. On clear days, you can see the whole west coast of Sabah; when it’s extremely clear, you can see all the land east.”

But climbing is only one of the activities here. The moderate temperatures at park headquarters draw weekenders from steamy Kota Kinabalu, 55 miles to the west. At Poring Hot Springs, visitors soak in tubs of hot, sulfurous water that’s reputedly good for the skin, or hike the 12 miles of trails. Naturalists come in search of rare plants and animals, such as the enormous Rafflesia flower, the flying lemur and the giant red leech.

Shortly after I’d started my climb, my guide, Kaungin bin Kolinang, led me on a side track through the vine-filled forest. “Low’s pitcher,” he said, pointing to a plant with leaves fashioned into little green jugs of fluid, each about the size of a teacup. Kinabalu has nine species of pitcher plants, including the world’s largest, the Rajah Brooke — named after James Brooke, who became rajah of Sarawak in 1842 — which can hold two liters of water in a single pitcher.
Mount Kinabalu has been extensively explored only during the last 150 years. For centuries the local Dusun people stayed well clear of the mountain. According to Dusun legend, the upper mountain was the haunt of departed souls — indeed, the name Kinabalu may be derived from the Dusun word nabalu, meaning “resting place of the dead.”
Sir Hugh Low, a British colonial official on the island of Labuan, about 100 miles southwest of Kinabalu, made the first known attempt to climb the mountain in 1851. In all, he tried three times, but injuries and equipment problems prevented him from ever reaching the top of the peak that now bears his name.
Three decades later, in 1888, British zoologist John Whitehead made a full ascent. After scaling the mountain, he spent two years in the vicinity collecting specimens, many of them new to science.
Kinabalu climbers were to remain scarce for decades to come. When British army major and amateur naturalist C.M. Enriquez reached the summit in 1925, he declared himself only the 25th person to have climbed Kinabalu — including those who had not reached the highest point. 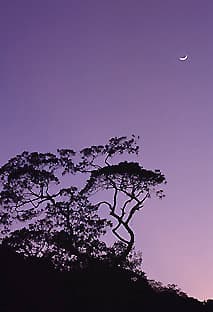 The Sabah government created the 185,250-acre Kinabalu Park in 1964 to protect the area’s natural splendors, but the mountain only became easily accessible 13 years ago with the opening of a highway from Kota Kinabalu. The number of visitors at park headquarters now hovers around 200,000 per year.
During our ascent of Kinabalu, I’d learned that while Kaungin’s English was limited, he did have one favorite command: “Slowly, slowly,” repeating it even when the path through the forest was still fairly easy. He had a point. Earlier, Eric Wong had told me of climbers dying of heart attacks.
Other risks also exist. When the weather is clear, climbing the bare granite above the tree line is fairly straightforward. But mist and rain can blow in at startling speed. With visibility close to zero, climbers can easily stray into areas above cliffs where a false step can mean certain death.

Everyone who climbs Low’s Peak must do so with a guide. The park has more than 80 registered guides whose main task is ensuring the safety of their charges. They receive first-aid training and are taught about local plants and animals so they can act as informal tour guides. “Our basic requirement for a guide is that he knows the mountain well, so that even in mist or driving rain he can find the way back,” says Eric Wong. Kinabalu has claimed nine lives since the park opened.
Each year, Wong and his team of about 20 rangers deal with a handful of injuries and accidents, usually involving climbers who have broken bones or been overcome with exhaustion. But some cases are more serious. In 1987 five climbers were scaling the mountain when three pushed ahead, while the leader stayed back with the slowest member. Says Wong, “Minutes later, the weather changed. Visibility was down to a few feet for three days.” The two who had lagged behind disappeared. Rangers looked for the men for a month, but found nothing. 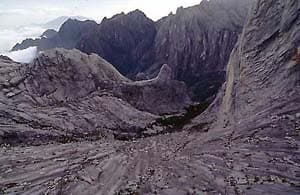 The most famous rescue involved ten British and Hong Kong soldiers who set out in February 1994 to become the first to descend Low’s Gully. Five became trapped on the towering cliffs. More than two weeks after the expedition began, the other five climbers stumbled out of the gully and raised the alarm. Park rangers, the Malaysian army and a British mountain rescue team all joined the hunt. After nine days, the stranded climbers were spotted and winched to safety aboard a helicopter.
On my climb, such drama seemed remote. From the rest house, the slopes dropped away. Stretching as far as I could see were the ruffled tops of clouds floating under a clear late-afternoon sky. Threads of lightning flashed in the clouds.
Not all take time to appreciate the spectacular views. To keep his rangers in top condition, Eric Wong instigated a race in the early 1980s to Low’s Peak and back. In 1987 the race was taken over by the Sabah government and turned into an international competition. Last October, a crowd of 400 cheered the winner, Ian Holmes of Britain, who made it to the peak and back in 2 hours, 47 minutes and 37 seconds.
It took me that long to clamber from the rest house to the summit. As the morning light begins to spread, I can now see a succession of granite spires to the east across the two-mile-wide chasm of Low’s Gully. A sea of clouds shrouds the rolling hills of Sabah.
I marvel at the astonishing beauty of this corner of Borneo, take a deep breath and think, I made it.