Dressed in jeans and a polo shirt, Singapore commercial and industrial photographer Tan Chung goes to work carrying his favourite Canon single lens reflex (SLR) camera and an array of accessories, together valued at more than $15,000. But for taking pictures of people and places in his everyday life, Tan favours a second-hand compact camera he bought for $30.

“I carry my compact all the time because it’s so much easier to use than my SLR,” says Tan. “I can shoot anything with it — birthday parties, friends I’m having a beer with, people on the street or a beautiful sunset.” Unlike Tan, I’d long dismissed compact cameras as toys. For 20 years, I took all my pictures on my Olympus and Nikon SLR cameras, proud of my ability to switch lenses and adjust the shutter speed, aperture and other complicated settings.

But I occasionally took shots on compacts owned by family and friends, and many of them turned out very well. I eventually bought a compact of my own, and it’s transformed me into a firm fan of these pocket-size cameras where all you need do is load, aim and click, with electronics taking care of everything else.

There are, essentially, four kinds of compacts. The most basic is the fixed-focus or focus-free type, which can cost $30 to $60. However, you can get much sharper pictures with the three autofocus varieties. The simplest of these is the plain autofocus. The other two varieties also have a feature that varies the size of objects in the photos. These are the autofocus with dual focal length and — at the top end of the compact range — the autofocus zoom, costing between $150 and $700.

Autofocus models automatically adjust all their settings according to the light. In dull conditions, they give much better pictures than fixed-focus models.

And nowadays, of course, smartphones can take outstanding photos.

To be sure, not everyone can use compacts as effectively as professional photographers like Tan. Still, you will be amazed at the quality of the pictures you get with compacts – and smartphones – if you keep in mind the following points.

Use the flash in sunlight.

Most people use the compact’s convenient built-in flash only for indoor or night shots. But professionals such as Tan Chung and George Tapan, one of the Philippines’ top travel photographers, suggest the flash can improve certain kinds of daytime outdoor shots. “I sometimes use it to balance the exposure,” says Tapan.

“If there is stronger light in the background, and the subject is a little dark, the flash can give the subject more light.” Tapan explains that the flash can also help reduce shadows cast on the faces of people standing directly under the midday sun.

Some new “automatic flash” compacts won’t let you decide when to use the flash. Steer clear of them, unless the model also has an override feature that lets you to make up your own mind. Whether or not to use the flash is a decision I’d never leave to an electronic chip, however “smart.” 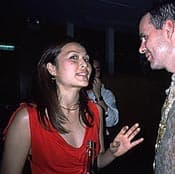 Most compact cameras aren’t good for subjects less than one metre away. “I sometimes use my compact to photograph people at weddings,” says Zahari Zakaria, executive photographer of the New Straits Times in Kuala Lumpur. “I stand about two to three metres from my main subject — that’s not too far and not too close.” Zakaria backs up around three metres, or even a little further, when he’s shooting a large group of people.

If you get any closer than one metre, most compacts are likely to give you a blurred picture. But there are a couple of ways of making a portrait seem like a close-up even when you’re not that close to the subject.

After obtaining a batch of regular-size 4R prints (10 by 15 centimetres), you might find some in which the subject’s face is too small. To improve on this, you can ask the processing laboratory to make fresh prints, this time cropping out unwanted parts of the photo to make the face look bigger, more like a close-up. But check first on the price. If it’s too expensive, you can instead ask for larger prints, then use a ruler and paper cutter to crop them as you wish.

Another point to remember: After shooting close-ups, you might notice that your subjects’ shoes, hair or even hands go missing from the print even though they are in the negative. “All automatic printing machines tend to crop the edges of the negative,” explains photographer Poon Ka Kui, who manages a Hong Kong photo-equipment shop. “So photographers should include up to 20 per cent more than they want in the photo.” Poon says the problem is worse with 3R (7.5 by 12.5 centimetre) prints, while 4R centimetre prints are much better.

Sometimes, when shooting a subject in the shade, you’ll see bright patches in the background. When this happens, the subject ends up looking too dark. To avoid this, I move the subject or shift my viewpoint to get the patches out of the frame.

However, a few of the higher-priced compact models automatically make adjustments for these bright spots. If your compact has this “backlight compensation” feature — the camera’s manual will tell you — your subject won’t be too dark. You may, though, find the bright patches are a little too bright.

Even the best films have difficulty rendering highly contrasting scenes.

Because of this, it is often best to take portraits in diffused light, such as in the shadow of a building.

“A lot of people just put their subject in the middle of the picture. The results can often be a pretty boring,” comments Hong Kong professional photographer Leong Ka Tai. He says you should consider everything in the frame. Look at the edges and the background, and think about whether you can put the subject nearer the edge of the frame. You should also watch out for anything that might look odd on a flat print — for instance, a tree that might seem to be growing out of your subject’s head.

Happily, composition is a great leveller. “I believe you can use a $5000 Hasselblad or a $50 compact, and you won’t see any difference in the photo unless you enlarge it,” says Tan Chung. “To me, it’s the colours and the composition — the overall mood — that make a great photo.

It doesn’t really matter what camera you use.” Few of us can learn to achieve prize-winning compositions overnight, but Tan believes that it helps beginners to look closely at magazine photos or even paintings to see how they are composed. “Watch where they place their main subject, and how they use the remaining area to enhance or complement the subject,” he advises. Don’t just look at how they place physical objects such as trees and flowers. The position of the horizon, the sky, of shadows and patterns, are just as important. “I sometimes follow the rule of thirds,” says Tan.

Tan is referring to what the old masters of painting called the “golden sections” or “one-thirds” rule. I often employ it when shooting landscapes — dividing the frame into three equal parts using two imaginary horizontal lines, then placing the horizon on or close to one of these lines. I use the rule for relatively small but eye- catching objects, too, but in such cases I divide the frame with vertical as well as horizontal lines and place the object where the lines intersect.

As you progress, you’re likely to look at your compositions more critically. You may even reach a point where you’ll feel like breaking all the rules and letting your imagination soar!

Compacts are best for outdoor shots on sunny days. Results when you’re indoors, even using the flash, are often disappointing. “If you use a flash when shooting indoors with a compact,” says George Tapan, “the subject may turn out very light, and the background too dark — the picture will look harsh.” So avoid using the flash whenever you can. Instead, get your subject to pose near a window, with light from the outside falling on them.

When there’s insufficient light, you have to use a flash. But a compact’s flash can’t illuminate anything properly if it’s more than three metres away, so make sure your subject is within this distance. However, if you are using more sensitive, “faster” film such as 400 ASA, your subject can be up to four metres from you. As well, use the red-eye reduction setting if your camera has this feature.

I mostly use not-so-sensitive 100 ASA film in my compact — it’s especially good when shooting in bright sunlight. But if I’m likely to be taking photos on a dull, cloudy day, or indoors, I might switch to 400 ASA film.

And whenever the light is poor, I hold the camera with both hands, or support it in some way.

Because they’re unobtrusive and you don’t waste time adjusting settings, compact cameras are ideal for candid shots. George Tapan finds them great for photographing children, like his nephews and nieces. “There’s no need to explain what you’re doing, you just point and shoot,” he says.

“It’s like you’re playing with the children and you’re holding a toy.” Tapan doesn’t like to photograph people who are posing stiffly, or simply press the shutter when someone is in his frame. “You have to be patient and capture a decisive moment, such as when someone is moving or laughing.” That’s what I did when visiting my brother Philip, and my nephews Matthew and Jonathan climbed on his back for a ride around the room. I promptly grabbed a compact and — click! — took a photo that ended up framed and on display in their home.

When you’re at a wedding, don’t just shoot the ceremony or the families arranged in rows. Everybody does that. It’s more satisfying to catch people in all kinds of situations. Tapan took his one of his favourite photos at the wedding of Jacqueline Estrada, the daughter of Philippine president Joseph Estrada, and Beaver Lopez. It shows Jacqueline bending to kiss the hand of a priest as her husband looks on.

The expression of delight on all three faces beautifully reflects the joy of the occasion.

Ever wonder how the professionals manage to take all those fascinating pictures all the time? Well, actually they don’t. The trick nearly all of them employ is to shoot the same object, model or scenery again and again and again, with different camera settings, light conditions, filters, angles and even films. Then they publish only the best photos.

(For every picture that National Geographic publishes, it rejects more than a thousand.) When I’m taking photos with a compact, I shoot under various light conditions, with and without the flash, and with the camera held vertically as well as horizontally. When people are my subjects, I wait for them to move or change their expression. Each time, I get a slightly different picture.

What do you do after you finish a roll? [Or a memory card.] Act like the pros again. 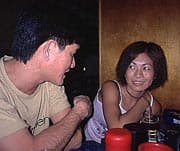 Instead of ordering prints of all the shots, ask the studio for a “contact sheet” — a single print with the pictures the same size as the negatives. Study them carefully with a magnifying glass and order prints of only the ones you like. This way you have a handy record of all your shots, yet save on printing costs. Best of all, you won’t have uninteresting prints cluttering the family albums.

For more advice on photography see my article How to take great outdoor photos in Hong Kong (much of the info can be applied anywhere).

[This article first appeared in the Asian edition of Reader’s Digest; the photos here — except the one of my brother and nephews — were taken with a Ricoh GR1s.]